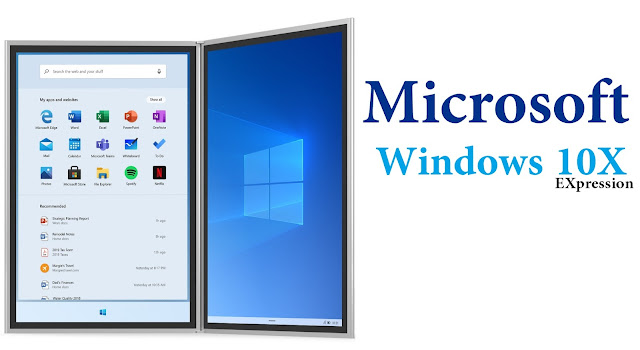 Microsoft took an unusual approach at its Surface event and took a look at Surface devices for 2020. The Surface Neo mainly consists of two displays and is foldable. For this to work, Microsoft has developed a special version of Windows, Windows 10X,  X stands for "Expression".

The Microsoft is extended by a new member, Windows 10X, in Windows family where the "X" is pronounced as the letter and should stand for "Expression". The special edition of Windows 10 appeared earlier on Windows Lite or codenamed Santorini. Now the cat is out of the box, Windows 10X is the future version of Windows 10, which is optimized for dual-screen operation. Microsoft introduced the new system on a planned new Surface device. The Surface Neo is expected to hit the market in 2020 with Windows 10X OS.


Of course, Windows 10 can always handle multiple displays, but Windows 10X is for dual-screen devices that consist of just two displays, like the Surface Neo. Windows 10X allows both the operation of two screens separately, as well as in an overall view. For example, you can read emails on the left and if you click on a link, it will be opened on the right screen. Apps can be dragged across the screens, for easier operation, there is also an optimized start menu.

Importantly, Microsoft has decided against a foldable display, as they are installed in the Samsung Galaxy Fold or Huawei Mate X and deliberately placed on two separate screens.


But as cool as the Surface Neo looks, Microsoft does not forget what you're working with today, and that's just the keyboard. That's why Windows 10X supports it too. If the hardware keyboard is flipped up, the device switches to the appropriate mode. Work is then mainly on a screen, much of the second screen covers the keyboard. The rest of the display surface becomes Wonderbar, where Microsoft shows helpful elements such as emojis or you can use the surface like a trackpad.


Windows 10X will not only support apps but will also be able to run normal programs using a special container technique. This Microsoft learns from past mistakes in which the devices were slimmed down too much. So users get an optimized and streamlined Windows with almost all harassment. Not that you always need that, but good to know that you could do it with Windows 10X.